Tough phones are designed to withstand the kind of accidents that other phones simply cannot. If you’re a fan of adventurous sports or work in a construction job and just want peace of mind that comes with owning a phone that won’t break if it gets dropped, then a tough phone could be exactly what you’re looking for.

What makes tough phones so unique?

Unlike standard handsets and high-end smart phones, a key feature of tough phones is the hard-wearing materials used in their manufacture. Some mobiles, for example, have outer casings made of rubber. These absorb bumps, allowing the phone to survive a drop of several metres.

Tough phones also feature waterproof fittings that allowed them to be submerged in water and emerge without any problems. Tough phones are made to be resistant to temperatures as low as -20C and as high as 60C, and are sometimes equipped with hard-wearing keypads that can withstand hundreds of thousands of button pushes.

Finally, tough phones often feature special high visibility colour schemes so they can be retrieved easily, even in poor light.

Why choose a tough phone?

Tough phones appeal to a number of different consumer types. Because they are water, dust and shock resistant, they’re quite popular with outdoor sports enthusiasts. They have also been embraced by builders and other tradesmen, who appreciate the tough phones’ loud ringers and built-in noise cancellation technology. It ensures that they won’t miss calls or important messages while they are working in a noisy environment

However Tough Phones aren’t just a niche product. Anyone who is prone to dropping their phone can benefit from the peace of mind that they provide.

Is a tough phone right for me?

A tough phone might not be right for everyone. The current generation of tough phones tend to be less powerful than the smart phones at the cutting-edge of technology. This means that they’re unlikely to be able to multi task nearly as efficiently.

With a few exceptions, tough phones are also unlikely to use the latest mobile phone operating systems. As a result, you won’t be able to access all the fantastic apps or applications that make owing an iPhone or Android phone such a joy.

NOTE: Before you purchase a Tough Phone, make sure to check the phone’s IP rating. A Tough phones IP (Ingress Protection) rating shows how effective the tough phone is being sealed against intrusion from tools and the elements. Depending on what you need a phone for, then your ideal IP rating will be different.

The Motorola Defy + JCB Edition has to be the most exiting release in the Tough Phone market. Traditionally... read more

IP Rating: The Higher The Rating The Better Protection From Dust And Water

P stands for Ingress Protection. A rating that classifies the degree of protection from intrusion or Immersion. read more

An amazing brand new offer is now available for people who want a Business Contract on Orange. It costs... read more

How do I choose the best tough phone?

If you require a Tough Mobile phone that will withstand both rough handling and even some occasional abuse, you'll... read more

Welcome to the amazing JCB Pro-Talk phone. The JCB Pro-talk is an extremely durable phone, which is a perfect phone... read more

Sonimtech are renowned for making virtual indestructibility phones but it met its match when it went against Blendtecs Total... read more 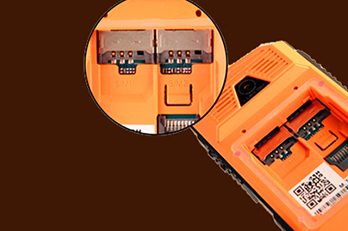 It’s taken a while, but finally Dual Sims are a realistic and practical option available with some of our... read more

Tough Phones Vs The World