We’ve covered this in a previous blog, but it’s worth adding in for completeness sake.  Once again the tough Phone is mixed in with concrete and put in a cement mixer.

For the second test, a tough phone is put into a commercially available washing machine and well, washed. This test is to determine whether your tough phone will still survive if you accidently leave it in your trouser pocket when washing your trousers.

This may seem unlikely to be tested in the UK soon, but if you accidently drop your Tough Phone next to the sausages, then you can be rest assured that your phone will still work. The Tough Phone was also ran over by two different cars and used in a game that the office calls “Axe Golf”

As you can see from the videos, Tough Phones passes the tests with flying colours. Even under the most concentrated attacks, only the screen breaks! For more information about Tough Phones or you want to show us your attempts at destroying a Tough Phone, Call us today on 01782 450 111 or e-mail sales@toughphones.net.

What are IP Ratings?

If you have ever bought a Tough Phone and wondered what an IP rating is, then this post is... read more

Tough Phones Vs The World

Why Tough Phones Are Ideal When Working On A Farm.

Working on a farm can be risky so it’s a good idea for farmers to carry mobile phones with... read more

Welcome to the amazing JCB Pro-Talk phone. The JCB Pro-talk is an extremely durable phone, which is a perfect phone... read more

An amazing brand new offer is now available for people who want a Business Contract on Orange. It costs... read more

How do I choose the best tough phone?

If you require a Tough Mobile phone that will withstand both rough handling and even some occasional abuse, you'll... read more

How JCB test their Tough Phones

JCB test their tough phones thoroughly to make sure they can survive in a tough environment. Most JCB tough... read more 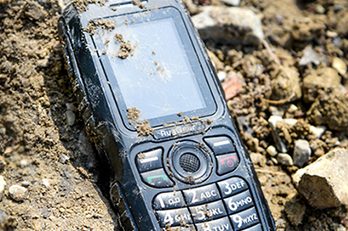 IP Rating: The Higher The Rating The Better Protection From Dust And Water

P stands for Ingress Protection. A rating that classifies the degree of protection from intrusion or Immersion. read more

We've seen many rugged androids in our time, but none are affordable and as amazing as the ones shown... read more

Tough phones are designed to withstand the kind of accidents that other phones simply cannot. If you’re a fan... read more